Cool t-shirts from across the net 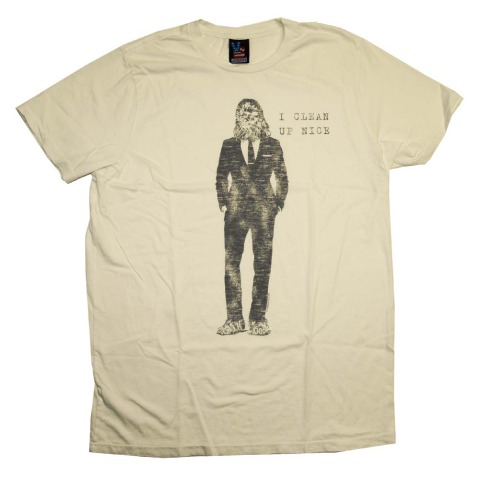 I’ve been meaning to do a dedicated Chewbacca T-Shirt for a long time now. It’s only fair. I look at a lot of Star Wars tees, and I always smile most when looking at the big fluffy wookie. So here’s one of my favourites.

There’s something about Chewy. Yes, he’s very cuddly. And yes, I look like him a bit. But there’s more to it than that. In the films, all of the other heroes have an agenda. Luke has to avenge his father, until he finds out his father is the guy who killed his father and then he just has to save the universe. Han wants Leia. Leia wants Han and revenge for Alderaan. Kenobi and Yoda want to ensure the survival of the Jedi religion. Lando wants revenge for Vader betraying him. Even the droids need to get their message to Obi Wan, and then they have specific roles too (like mince around and beep). And then there’s the wookie. Chewy’s in it because he’s a good guy. He’s in it because Han Solo is his buddy and therefore, he goes where his buddy goes. He carries droids, fights stormtroopers, suffers ewoks and generally kicks ass, all because his best pal is after a girl. If you can name a better wingman in the history, of wingmen… well, you can’t. So if any cast member from Star Wars deserves a t-shirt of his own, it’s Chewy. And to celebrate the occasion, he’s even wearing a suit. He cleans up very nice, indeed.

So get your own suited Wookie T-Shirt by heading over to 2bhipshirts.com where it’ll cost you $26.99. It comes only in beige/cream and sizes go from small to extra large. All hail Chewbacca, for he is truly the greatest of heroes. HHHHRRRRRUUUUGGGGHHHH!!! (that’s my Chewy impression – good, innit).